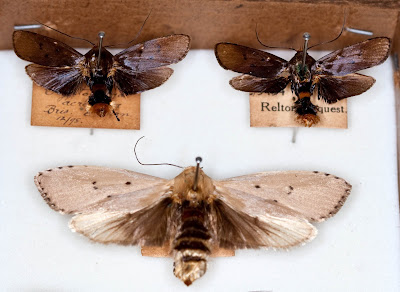 Closely allied to C. sarcinota, Meyr., but appears a good species. The male is very different in general appearance. The female may be  best distinguished by the whitish apices of the hindwings. Brisbane,  a series bred by Mr. Illidge from Eucalyptus saligna. Also found on other species of this genus.

Other references
Cryptophaga balteata, Walk.
I have seen specimens of this insect from both Sydney and Wimmera district, Victoria; it has not been hitherto recorded but from Mount Lofty, South Australia. (Lower, 1894).
Cryptophaga lurida, Meyr., var. asemanta, Lower.
Differs from the typical form in being without discal spots of forewings, otherwise precisely similar.
Three specimens from Sydney, N.S.W. (Coll. Melbourne Museum). (Lower, 1894).
Zitua balteata, Walk., ♂, ♀, pupae, burrow;
...
and in the luteous species Z. balteata the male is dark chocolate, and differs so widely in shape and size from the female as to have been put at one time in a separate genus. I leave it to those who have studied such subjects with more attention than myself to endeavour to give a rational interpretation of these differences. So far as my experience goes, the prevailing rule among the Lepidoptera is that the female is more sluggish and more protected by coloration than the male, but here we have apparently an exactly opposite process. The males appear to be gradually assuming a protective colouring, which in the conspicuous white females is wholly disregarded, with the single exception
of M. unipunctana, which has a nearly white male and a grey female." (Walsingham, 1898).
Type, β. Zitua balteata, Wkr.
= zitua, Wkr., Cat. Lp. Ins. BM. XXXV. 1841 (1866); (one of three synonymic ‘types’ given for the genus Cryptophaga McLeay. Walsingham & Durrant, 1900).
Cryptophaga balteata, Walk.
Male. Zitna balteata, Walk:, Suppl., 1841.
Female. Cryptophaga lurida, Meyr., Proc. Roy. Soc., S.A., 1890, p. 37.
Both sexes Cryptophaga acroleuca, Turner, Annals, Queensland Museum, 1897, p. 8.
I am indebted to Mr. Meyrick for this synonymy. (Turner, 1900).
[Cryptophasa hyalinopa] Nearest balteata, Walk., but very distinct by the curious semi-hyaline hindwings. (Lower, 1901).
[Cryptophasa psilocrossa] In general appearance resembles the male of C. balteata, Wlk., but the wings are broader and differently shaped. It also differs in the pale spot on thorax, absence of dots on costa of forewings; and partly bare margin and white cilia of hindwings. (Turner, 1902).
In an attempt to trace relationships among the gelechioids I examined the larvae of four Australian Xyloryctinae in the BMNH: Cryptophasa hyalinopa Lower, C. balteata Meyrick, Echiomima mythica Meyrick and Perixestis eucephala (Turner). These species also have the adfrontal area not reaching the vertical angle of the head and the distance between setae P2 is almost the same as that between setae PI. Therefore it seems that the combination of both characters of the head, i.e., adfrontal area not reaching the vertical angle and the distance between setae P2 about the same as between setae PI, is a good diagnostic feature for distinguishing the larvae of Stenominae and Xyloryctinae from those of other Gelechioidea. (Becker, 1982) 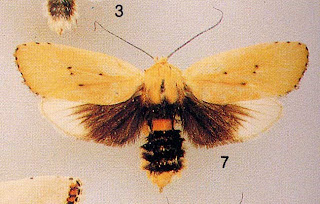 ♀ - Pl. 6.7: Common, 1990
Strongly dimorphic species of Cryptophasa include C. balteata (Walk.) (Pl. 6.7), C. pultenae Lew. (Fig. 23.14), and C. epadelpha Meyr. The male of C. balteata, which occurs from southern Queensland to South Australia, is much smaller than the female and is blackish in colour. The larva bores in stems of young Eucalyptus trees; sometimes the larval activity ringbarks the trees and the part above dies. (Common, 1990).
Hypertrophinae (fig. 9.2F). Valva with free sclerite at distal end of sacculus a supposed apomorphy but also occurring in Cryptophasa balteata (Xyloryctinae). (Hodges, 1998).
[The free sclerite in the Hypertrophinae is attached to the end of the sacculus; the clasper from which similar ‘free’ structures arise in Xyloryctinae appear to develop from the inner margin of the sacculus. Occasionally the clasper will have a pronounced hook or sclerotisation at the apex].
Diagnosis:
Description:
Head: 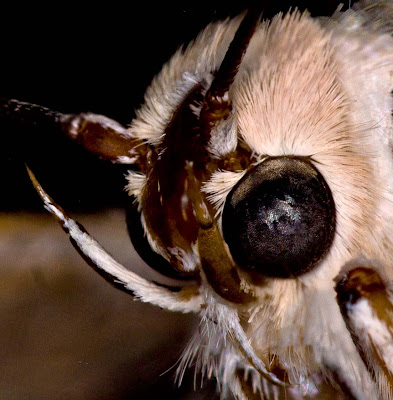